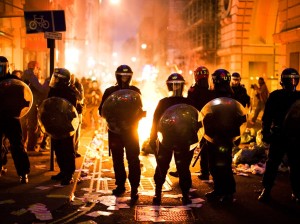 Any form of violent confrontation with Trump or his supporters fuels the rise of Trump. Violent confrontation plays right into Trump’s hands. It provides justification for measures to rule with greater authoritarianism. A reference to history is helpful. The violent protests prior to the 1968 presidential election contributed to the rise of Nixon under the banner of being the “law and order” candidate. Violence leads to a desire for security, and Trump portrays himself as the strong leader who will not only make America great again, but who will also keep people secure and safe from the “violence of the other.”

It would be wise for people who are resisting Trump’s candidacy (and I think it is a moral imperative to resist Trump) to do so in a way that avoids contact with or even proximity to Trump or his supporters. Being from Oklahoma, I find it helpful to think of Trump as something like a tornado. When people give him attention by protesting in or around his rallies (especially when the protests turn violent), it is like the inflow of warm moist air that strengthens the tornado and the storm. The inflow feeds the tornado. The tempest of Trump and his supporters is made more powerful and more dangerous when they experience direct confrontational protest. It validates their feelings that there is something wrong with the rest of America and strengthens their resolve to rotate even more violently around the core of the Trump storm to make sure that its core does not dissipate. Trump himself seems to experience such confrontational encounters with a sense of glee. He knows it actually benefits him – especially if the violence involved comes from the side of the protesters.

Violence feeds Trump. Nonviolence starves Trump and his supporters. Nonviolence and avoidance of direct contact with Trump and his supporters creates an outflow from the storm. Outflow is one of the signs meteorologists look for as an indication that a tornado or a storm in general is weakening. When the inner dynamics of a storm are weakening, air tends to flow away from the storm as opposed to flowing in. Nonviolence and avoidance of contact with Trump and his supporters will likely cool off the storm and decrease the chaotic and frenzied whirling of supporters around the tumultuous Trump core. People who are resisting Trump must stop feeding the Trump storm. We must starve Trump with nonviolence and lack of direct physical contact. Without the frenzy around him, the weakness of the inner core of Trump and the vacuous nature of his ideas will be more exposed, and this will more likely lead to the dissipation of his candidacy. If, however, violent protests of Trump increase, and if this coincides with experiences of other forms of violence like terrorism, the United States may be headed for one of the most destructive and dangerous storms of our national existence. The discipline of those resisting Trump to be nonviolent and to remain in strategic physical disengagement could play a pivotal role in the months ahead.