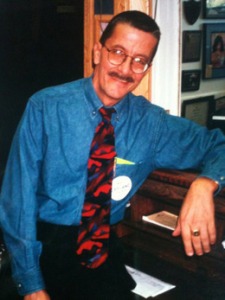 Celebration of communion is always meaningful for me, but the closet thing I have felt to divine presence in sharing a meal with others has not been in the sharing of the Eucharist in a church service but rather in the monthly preparation and sharing of meals that the College Avenue United Methodist young adult group participated in with the Somerville, Massachusetts support group for persons living with AIDS from 1994 to 1996. During that time College Avenue United Methodist Church was blessed to have an outstanding lay leader named Bob Publicover, who was an openly gay man and had lived with AIDS as long as anyone had up to that time, and it was he who created opportunities like these monthly meals known as the Somerville Dinner Program. At the time of his death in 2012 at the age of 63, Bob was the longest living AIDS survivor in the country, and he left his community with a legacy of love and hope. Bob was a gift and a gadfly to our church. reminding us where Jesus would be in our community.

I was pretty nervous about participating in these meals at first. It was not something I was looking forward to doing. The thought of sharing meals with a room full of persons who were dying made me uncomfortable. At first I think I felt that the meals were a way for us to show acceptance for our sisters and brothers living with AIDS, but after the first couple of months I realized that it was just as much if not more an act of acceptance of us by the persons in the support group. We were accepted into their community even though we were members of a denomination that officially judged and excluded many of them from the full life and ministry of the church, even though many of them had every right to be angry about how the church had treated them. In spite of this, they accepted us.

Those monthly meals created a sacred space in which forgiveness and grace were offered to us. The support group became our ministers celebrating the sacramental gift of Divine Presence with us at table. What I had first thought would be a place of confrontation with dying became a time and place of real living for me. I so looked forward to those meals. I vividly remember the times I would shop for groceries and the feeling of being compelled to make sure to get the very best food possible for this very sacred monthly family meal. This sacred meal renewed my spirit, and it renewed the spirit of persons in our church and community. If my United Methodist denomination could somehow find a way to give up the judging and excluding that have created such brokenness in our community, perhaps we could become more able to make spaces like these for the presence of the Holy. This continues to be my hope and it continues to be my prayer as we seek the Beloved Community together.