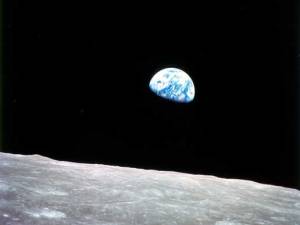 During the first year of my life, Martin Luther King, Jr. published an essay titled “The World House” in which he called on all of us to work together to eradicate the evils of racism, poverty, and war. In that essay, he wrote these words, “We have inherited a large house, a great ’world house’ in which we have to live together—black and white, Easterner and Westerner, Gentile and Jew, Catholic and Protestant, Muslim and Hindu—a family unduly separated in ideas, culture and interest, who, because we can never again live apart, must learn somehow to live with each other in peace.” – (Martin Luther King, Jr., from his “World House” essay, 1967.)

Although we may be from many different religions and cultural backgrounds, we share this one planet, this one world house, of which we are all a part. And, unlike other kinds of houses, if we destroy our world house, we cannot simply move to another house or build a new one. This one world house is the only one we have. There are no Mulligans when it comes to caring for the household of our planet – there are no “do overs” – we have to get it right the first time because it is the only time we have. We share the awesome responsibility of making sure the world house we have inherited will be enjoyed by generations of life to come, humans and nonhumans alike, and persons from all faiths and no faith. If we do not accept this responsibility, our children and their children might look back on our generation and ask the questions, “What were you thinking? Did you not care enough about us to give us a house that is filled with peace and with justice and with abundance of life? Were you so caught up in yourselves and your consumption that you failed to see what you were doing to our home? Were you so short-sighted and self-absorbed to think that whatever enjoyment you experienced from the excesses of your lifestyles warranted the devastation of our planet?” I hope that our children will not have to ask these questions, but this will only happen if our hopes are expressed in actions that move us in new directions, actions that take care of this one planet that is our only home.

It is mind boggling how much damage we have already done to our planet in such a short period of time. On a planet that has existed for 4.6 billion years or so, we have only existed as a species for a couple of hundred thousand years or so. For most of that time we had very little impact on the global environment, but recently that has changed. In less than a blip of geologic time, so minute as to be almost no time at all, we have contributed to a mass extinction of species and we are changing the very climate of the earth itself. Conservative estimates are that the extinction rate caused by humans is 100 to 1000 times the normal background extinction rate. We have been around such a short time, but we have not been very well-behaved members of the household. If the non-human members of our household had a vote on whether we should stay or leave – let’s just say that it is good for us that they don’t have the vote on that one.

I hope that our legacy will not be the sixth great extinction on our planet and the only one brought about by the activities of a single species. I hope that we might be able to turn away from our ways of living that bring more death to the world than life. I hope that we will be able to think thousands and millions of years into the future and think about all species of life rather than just thinking about our own generation of human persons. I hope that persons from all religions and all cultures might be able to work together for the renewal of our planet. I hope that we will be able to see that we must somehow learn to live with each other in peace. I hope that we might be able to see that although we may be from many religions or even from no religion, we are members of one planet. Let us love it and love each other, let us work together for justice for all of its inhabitants, let us live in ways that allow all life to flourish, and let us create a global interfaith ecumenical movement to care for our one world house by creating true peace, eradicating poverty, and sustaining our planet.