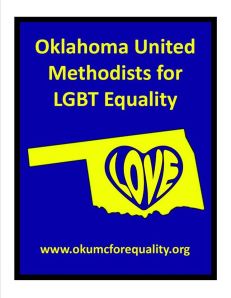 That Day is today! In Oklahoma’s two most widely circulated newspapers, The Oklahoman and the Tulsa World, 96 Oklahoma United Methodist Ministers signed an open letter to the people of Oklahoma that speaks out against the rules and practices of the United Methodist Church that discriminate against persons who are LGBTQ. Since the time the letter was submitted for publication, the number of clergy signatories has risen to 125, and now Oklahoma United Methodist laity are signing on as well. To add your name go to this link: http://www.okumcforequality.org/

That so many clergy want to have their names printed in Oklahoma’s two major newspapers in support of marriage equality and full participation of LGBTQ persons in ordained ministry is a symbol of great hope for the creation of a more inclusive community both in our state and within our churches. It is a symbol that support for our beloved LGBTQ sisters and brothers will continue to grow and that we  will continue to openly and publicly challenge the practices of discrimination within our denomination. Today is a day to express faith, hope, and love that will be lived out through justice for all people. Today is the day when 125 Oklahoma United Methodist clergy stood up publicly for marriage equality and for full participation of LGBTQ persons in the United Methodist Church.

Here is the letter and the clergy who signed it:

OPEN LETTER TO THE PEOPLE OF OKLAHOMA

The United Methodist Church’s official teaching is that homosexuality is incompatible with Christian teaching while at the same time God’s grace is available to all. We have church laws in place forbidding clergy from performing same gender weddings and forbidding non-celibate LGBT clergy from being ordained. Nevertheless, there are many United Methodist clergy and laity who are not in agreement with our church’s current rules and teachings. Our denomination allows for open discussion of ideas, dissent, and has a process for creating change in our rules. Our denomination’s top legislative body (General Conference) is the only entity that can speak on behalf of the denomination, yet we know many faithful United Methodist Christians wish to see a church fully inclusive of the LGBT community. We respectfully and humbly argue that United Methodists are not of one mind in our understanding of human sexuality and homosexuality. Through our engagement with scripture, tradition, reason, and experience, we have come to affirm the rights and dignity of all persons regardless of sexual orientation and gender identity.

We celebrate the freedoms coming to the LGBT community in Oklahoma and we pledge our love, affirmation and equal treatment to all persons. We do so as we continue to pray and work for a fully inclusive United Methodist Church.