When They Come to Your Door 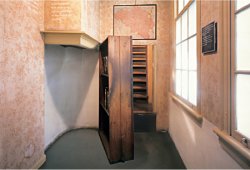 Entrance to the “Secret Annex”

When a President Trump begins to call on American citizens who are non-Muslim to help identify the American citizens who are Muslim or persons who are visiting our country who are Muslim for purposes of registration or deportation, will you be one who will give over names or will you be one who will protect your Muslim neighbors? What will you say when authorities come to your door asking if you are hiding Muslims in your home?

When a President Trump begins the rounding up and deportation of the 11 million Latin@ persons who are living in our country without documentation and calls on you to help identify them, will you be reporting your Latin@ neighbors to the authorities? Will you call in when you see a Latin@ person about whom “you are not sure” because you have never seen their papers? Come to think about it, how many people’s papers have you actually seen? Will you report them just to be safe – just to make sure you are complying fully with President Trump’s executive order?

What if a President Trump goes back to his original position that there needs to be some kind of punishment for women who have an abortion? If he stacks the Supreme Court with justices who overturn Roe v. Wade, will you comply with his request to report women suspected of having abortions to the authorities so they can be properly punished? What if laws are created where it becomes mandatory to report women who have abortions and the physicians who perform them? What if not reporting them is considered aiding and abetting criminals and itself becomes a crime? What will you do?

So, what will you do when the authorities come to your door asking for the Muslim, the Laint@, the woman? What will your response be? In a state like Oklahoma where I live, the only thing that protects us from some of these things happening right now is the presence of a judiciary unwilling to ignore the unconstitutionality of such approaches. In a Trump Presidency with a Trump stacked Supreme Court, perhaps that will no longer be a barrier.

Last week, an Oklahoma legislator, Representative Pat Ownbey, posted an article on his Facebook page that called for a “final solution” in relation to Muslims, calling for their removal from the civilized world. Final solution? Deportations?  People are openly talking about things that would have been unthinkable to say publicly not long ago. This is the Trump Effect, and don’t for one second think it will not continue to escalate if good people remain silent.

This situation is extremely dangerous. This cannot be underestimated. We humans have shown ourselves over and over again to be capable of unspeakable evil, and we cannot be under the illusion that it can never happen here, because it has already happened here in our racist, slave owning, Jim Crow, lynching, and genocide of native peoples past. We just have never really admitted it fully as a country and come to terms with it. The sickness of spirit that made those evils possible is at work again today in our midst, and now is the time to stand for radical love, justice, and peace. Otherwise, in a Trump presidency, perhaps the family you hide in your secret annex will have a daughter who will keep a diary of her experience, or perhaps it will be your family who is in hiding.