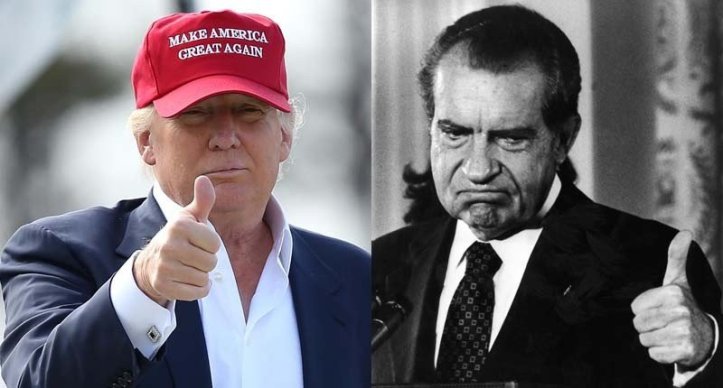 Like Trump, Nixon was compromised by his insecurities, his ego, his racism, his paranoia, his disdain for his critics and the press, his dishonesty, and ultimately his criminality; but there is no evidence that Nixon was ever compromised by a foreign adversary who wished to destabilize our country and weaken our democracy.

Nixon was an embarrassment to himself and the country, he was mean and vindictive, he committed real criminal acts in the process of covering up Watergate, and it was proper for him to resign in disgrace. If you listen to the Nixon tapes, you hear clearly that Nixon, much like Trump, was a horrible person who surrounded himself with horrible persons. Nixon’s presidency represents a sad and low moment in our history, but as bad as Nixon was, his presidency was not a significant threat to our republic.

Past presidents have made significant mistakes and at times have committed horrific sins against humanity and the environment, but never before in our history have we had a president who seems intent on serving the interests of an adversarial country more than our own.

If we survive the threats that our current president and his Republican and Russian enablers represent to our republic, we will look back on the time of Nixon and the time of Trump and see Nixon as a very low point in our nation’s history, but see Trump as a clear threat to our very nation.

The hope for our country now is that Trump’s presidency will end much as Nixon’s presidency did or that Trump will at least be held accountable by a new Congress elected in November of 2018. Whether by impeachment and conviction, resignation, or by election; we must keep the worst president in U.S. history from creating further harm to the republic that Benjamin Franklin so hoped we the people would have the wisdom and courage to keep.