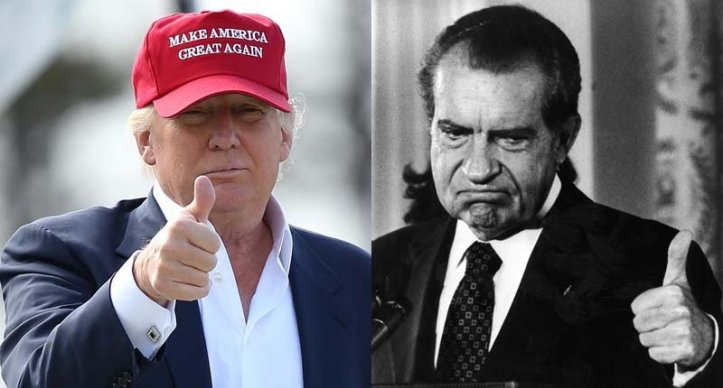 Hearing the word yesterday that Trump fired FBI Director Comey immediately brought to mind the last president who fired people who were responsible for investigating him. President Nixon’s infamous Saturday Night Massacre was a turning point and accelerated the demise of the Nixon Presidency. Trump fired Mr. Comey in the most disrespectful manner, with Comey learning of his dismissal via TV coverage while speaking to a group of FBI agents. Trump apparently has more respect for losers on The Apprentice than he does for the Director of the Federal Bureau of Investigation.

Attorney General Jefferson Beauregard Sessions III, who agreed before the United States Senate to recuse himself from anything related to the Trump/Russia investigation, recommended by official letter that the president fire the FBI Director who is leading the Trump/Russia investigation. This is yet more evidence in a long train of evidence that this administration will never play by the rules unless someone finally has the courage to enforce the rules.

After Trump fired Comey, his spokespersons were making the rounds on FOX News publicly calling for an end of the Trump/Russia investigations. Today we know that now former Director Comey asked for more resources for the ongoing inquiry into Russian interference in the election just days before being fired. If you don’t think firing Comey was related to the Trump/Russia investigations, then I guess Trump and Putin have you right where they want you.

It is clear that whomever Trump appoints to be FBI Director sure as hell cannot oversee the ongoing investigation of the Trump campaign’s connection to Russia, so the time for a special prosecutor is right now!

My take is that Trump thinks he is ultimately safe from action against him by the Senate and House of Representatives because of McConnell’s and Ryan’s unwillingness to pursue him, and he is probably right – they have proven to both be gutless opportunists. The only currently existing, semi-apolitical Trump/Russia investigation occurring at this time is/was the FBI investigation. Firing Comey weakens and slows down that investigation and allows Trump to appoint a director that is friendly to him. All this buys him more time to consolidate more and more power to make him less and less vulnerable to prosecution, If there is not an appointment of a special prosecutor right now, we are in deep trouble and will be facing a constitutional crisis.

The people must demand that members of Congress hold themselves true to their oath of office that includes: “I will support and defend the Constitution and laws of the United States of America against all enemies, foreign and domestic” – foreign AND domestic. There needs to be hundreds of thousands of people in the streets of D.C. and protesting at representatives’ and senators’ offices across the country until a special prosecutor is appointed. Every day that goes by fuels the engine of Trump’s growing stranglehold on power and diminishes the hope of learning the truth about Trump’s ties with Russia and of holding Trump and members of his campaign and administration accountable for their actions.

This is not a drill. Our democracy is under direct threat, and the President of the United States is the threat. Take courage. Come together. Be non-violent. But take to the streets to demand a #SpecialProsecutorRightNow!