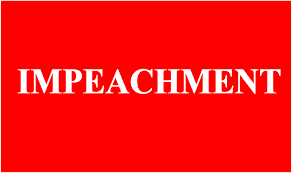 Speaker of the House of Representatives Paul Ryan announced today that Articles of Impeachment are being brought against the 45th President of the United States, Donald J. Trump. At a press conference to announce the decision, Speaker Ryan made it clear that the decision was not based on concerns about Trump or members of his campaign colluding with the Russian government. Ryan stated that the decision was also not related to evidence that President Trump shared highly classified information with Russian diplomats in the Oval Office the day after Trump fired FBI Director James Comey, whose agency was conducting investigations into Russian interference in the U.S. presidential elections.

Speaker Ryan stated, “Let me be crystal clear, today’s decision to bring articles of impeachment has nothing to do with Russia, Trump’s ties to Russia, or the relation of any member of the Trump Campaign or any official of the Trump Administration with Russia. However, I regret to inform the American people that in the course of the investigations it became clear that President Trump had an affair with one of the White House Interns and then proceeded to lie to Congress about the affair. When this information became undeniable, it was clear that the House of Representatives, and I as its leader, had no other choice but to proceed with impeachment. There is clear precedent for the House moving forward in this manner, and I know that my colleagues in the House and Senator McConnell and our colleagues in the Senate will proceed with their solemn moral obligation to never allow a president lie about an affair. The last time this happened, we said ‘never again,’ and our actions today show that we meant it.”

When asked whether the investigation would continue into possible collusion between the Trump campaign and Russia and into the allegations that highly classified information was given to Russian diplomats by the president, thus putting sources and methods of intelligence at risk, Speaker Ryan responded, “My colleagues and I feel strongly that there is no need to further waste tax payer money on these investigations. We know that Trump had an affair with an intern. We know that he lied about it. What else is there to investigate? We need to get on with the important work of the American people to repeal and replace Obamacare, privatize social security, provide Americans with school choice, reduce corporate taxes, eliminate the inheritance tax, and cut regulations for the fossil fuel companies and the financial sector. This is a dark time for America,” Ryan declared, “but I know that we as a people will make it through the days ahead, and I have complete confidence in Vice President Pence to lead us forward as a nation. God bless you all, and may God bless the United States of America.”

When pressed on whether he thought Vice President Pence might get caught up in the scandal, Speaker Ryan replied, “That all would depend on whether Vice President Pence knew about the affair and also lied about it. We will cross that bridge when we come to it, but if that is the case, fortunately the Constitution of the United States has provisions for how we handle that. No further questions at this time.”*